Elephant graveyards and lots of other interesting, totally unrelated stuff. 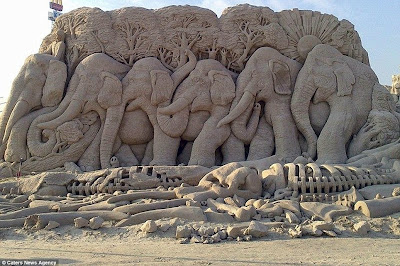 Believe it or not, this magnificent Elephants' Graveyard is a sand sculpture by Paul Hoggart and his wife Remy. And I thought I was good with a small plastic bucket and shovel when I made a snow cone on the beach.

This was not the couple's first attempt as you can imagine. They have traveled the world impressively creating beauty on beaches and everywhere there is sand. You must see more here.

I stumbled across something remarkably similar just last week... an old TV graveyard. That's my beauty on its side next to that snazzy mahogany model anyone would die for. My set weighed about 150 lbs and was so unbalanced that it took two strong men (one me, of course) to get it out of its 'safe place of honor' and into a Jeep 'hearse' to its final resting place.

Don't tell it but the replacement cost less, was bigger and better and weighed just 15 pounds.

Talking about change in time and technology (which I am), I recently read that 1); an unmanned commercial space craft 2); delivered 40,000 lbs of supplies to the 3); International Space Station. Upon its arrival, 4); a robotic arm operated by 5); an Italian 6); female 7); astronaut secured it and unloaded, among other vital items, 8); an espresso machine for a great shot of coffee.

Now you don't have to go back too far (like when television was just black and white and fuzzy ) before any of these things were only imagined in Popular Mechanics. The only difference is that everything evolves faster now and old time imagination is way, way out of date.

For Example: Technology now exists, say the Chinese, for a submarine to travel 6,100 miles underwater--from Shanghai to San Francisco--in an hour-and-40-minutes. The Russians have already developed a torpedo that traveled faster than 230 mph. 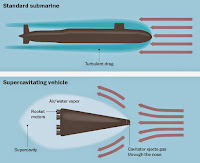 This is all because of a technology that creates a frictionless air 'bubble' around a vessel that allows it to 'fly' underwater, facilitating incredible speeds. Thinking outside the box that assumes engine thrust, this concept uses a special liquid that would be ejected from the nose of the vessel that would 'lubricate' it and reduce water friction to less than that of a plane flying through the air.

Impossible? Don't bet against it... or anything else that sounds too incredible. Be mindful, we are now accepting applications for those wishing to be on the first spaceship to habitate Mars. (The catch: it's a one-way trip. The brighter side: You won't have to change flights in Atlanta.)

A little slower than that: Two Swiss pioneers have a plane that can fly around the world totally on solar power. The single seat Solar Impulse 2 has 17,248 ultra efficient solar cells that transfer solar energy to four electrical motors that power the plane's four props. The cells also recharge four lithium polymer batteries to power the plane at night.

The Solar Impulse 2 is about the size of a mini van but has a wingspan similar to that of a Boeing 747. Its optimal flight speed is about 43 mph and can can fly as high as 37,000 feet.

All this and the Facebook too.  Despite all of our triumphs and ever evolving ways to help and harm humankind, recent studies have shown the internet may not make you smarter, but it will make you think you are. Tweet that!