Man murdered in 1958 died last year. True story... and others like it. 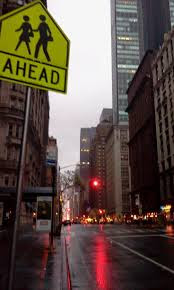 One cold, wet New York morning some 56 years ago, a Midtown Manhattan porter on his way to work felt a stabbing blow to his back. As he hurried away from his attacker, the wound began to throb and blood spread through the slit in his coat.

He made his way to a hospital for treatment but never filed a police report and his stabbing became part of the lore of the Italian immigrant and his family.

Antonnio Ciccarello died last fall. The medical examiner found evidence that his passing at 97 was subsequently caused by that long ago stabbing. Ruled as homicide, the city's oldest ever lingering death triggered a murder investigation which subsequently proved unresolvable.

If this was a Western movie, he would have been shot and stumbled...  twice around the world before he dropped.

Note: This scenario isn't altogether unheard of. If a medical examiner determines the cause of death can be linked to an attack, the age of the victim or time lapsed is not a factor.  Last year's death of James Brady who took a stray bullet in head during the attempted assassination of Ronald Reagan in 1981 was, in fact, a homicide.

Speaking of the dead, some have no earthly place to be. About 4,000 unknown and unclaimed corpses turn up in the United States every year? About half of those are murder victims. In medical examiners' evidence rooms, some forty thousand unaccounted for remains--murdered, suicides, accident victims--wait for a final material disposition.

"Unidentified corpses," says Deborah Halber, "are like obtuse, financially strapped house guests: they turn up uninvited, take up space reserved for more obliging visitors, require care and attention, and then, when you are ready for them to move on, they don't have anywhere to go." 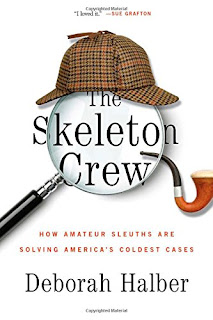 These are the subjects of her new book The Skeleton Crew :How Amateur Sleuths are Solving America's Coldest Cases. Many of us, inspired by television's CSI, NCI, Bones and the like, want to be like Sherlock Holmes, solving cases others can't, with wit, guile... and the internet. "What say, Holmes, shall we give it a go?"

Digging around cold cases can prove to be pretty macabre at times, Halber says. There was an infamous Kentucky crime known as "The Tent Girl Case" because her body was found stuffed inside a canvas tent bag. The man who finally identified her began searching internet forums on missing girls in that area. He noted a posting by a woman searching for her lost sister near the date the body was found. A subsequent DNA match from a sample the woman supplied proved that the tent girl was her missing sister. Good work Sherlock.

Among others resolved are  "The Lady in the Dunes" and "The Jane Doe in a Red T-Shirt." As for "The Head in the Bucket" case... that's another story in itself.

Searches run the gamut from the headless to the heartless so sleuths have a wide variety to pique their interest. And it is productive. Some 30,000 murder victims have been identified after police have run into a brick wall. Still, says Halber, 99.9 percent of the cases remain unresolved. There are enough left for everyone with a Dearstalker hat and smokeless pipe mentality.

As a side note, Halber learned from talking with many forensic experts and attending often grisly autopsies, a human skeleton will fit into a 200-square-inch box. Good to know if that answer ever turns up on Jeopardy.

So if you are an armchair detective or just interested in a well told story, here's a book for you.

A very kind and well-thought-of lady died recently and her obituary read most pleasantly of the good she did for herself and others in her lifetime. Her final wishes expressed there be no funeral, no memorial service and no visitation. She did not want flowers sent but expressed only two wishes she hoped would be honored:  that "you think about me once this week and do a good deed---actually Do it." And "those who don't go to church regularly, attend church once within a month of my passing."

Not a bad tribute in itself for a gentle lady who liked people and treasured her privacy.

Reader note: My last three posts touch on Elephant graveyards, longest lived people and death. So enought of that for now. TO LIFE... and beyond. (except for this last comic strip.)

Email ThisBlogThis!Share to TwitterShare to FacebookShare to Pinterest
Labels: murder, the dead, The Skeleton Crew