Best Quote Ever... EVER! 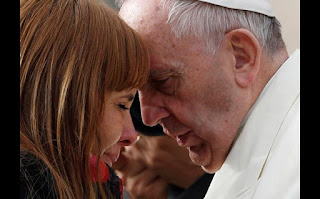 A few years back, an Italian journalist asked Pope Francis how he might act as a confessor to a gay person. He responded, "Who am I to judge."

He further said, "I am glad we are talking about homosexual people because before all else comes the individual person in his wholeness and dignity... people should not be defined only by their sexual tendencies: let us not forget that God loves all his creatures and we are destined to receive His infinite love."

Now about this being the best quote ever, it is not because it was said by Pope Francis, though that certainly adds emphasis, it is because it is true to all, even if it is not espoused. Kings judge, dictators and tyrants judge, religions judge and wars are fought because of judgements, but we are humans with flaws and frailties. We have been known, however, to strive to be above the worst of us.

If you do read the bible or other religious texts, you will see wording and expressions saying, in effect, "Judge not lest you be judged."


One of the first rules of living is that you are the person most responsible to yourself... the only one who can directly affect your moral outcome. So why is it our job to judge anyone as worse or different than us as being less than us. We are all more alike than different.

If you can make even one small gesture of that understanding today, you will have made the world--and your moral self--better. What power is that!