Actually, it's not fair to imply ice fishers are dopes. some are, of course... presumably, most aren't. Though I have never ice fished, there is some implied merit in cooling one's heels every once in a while.

All this is because ice fishing is trying to become an official Winter Olympic event--really. Makes sense though. After all that money goes into building a majestic rink for figure skating, there must be other uses for the venue to justify its cost. Though how good the fishing is under the rink ice is still up for speculation.

And ice fishing is not the only fringe sport that has gone to drug testing. Competitors in darts, miniature golf, chess and tug of war were all recently tested. And before you laugh, two miniature golfers (no, not dwarfs or little people) recently tested positive according to the World Anti-Doping Agency. And so did two bowlers, eight roller sporters and one tug-of-war puller. 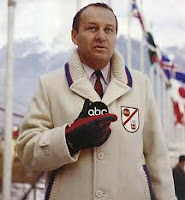 Rumor has it that one miniature golfer became suspect after a few of his 'drives' on the competition put-put course went loop-the-loop, through the windmill, into the clown's mouth and well over 300 yards.

Personally, I can hardly wait to see the heated competition on the next Wide World of Sports. Where
is Jim McKay when we need him most? Oh, dead.

Speaking of sports, did you know that in 37 states, the highest paid public employee is a sports coach? Take that, college professors. Have we got our priorities right or what?

My wife, bless her heart, was in an auto accident a short while back. While she was exiting a parking lot, someone pulling out of a parking stall and backed into her rear door. When that lady and my wife met out of the collided cars, the lady shrugged her shoulders and said to my wife, "I don't know how they are going to call this one."

Well, police figured it out real fast, of course... but that's not the point of this story.

The damage was minor (by comparison)--just $2,300 worth. No hair was mussed on either head, no back injury or stiff neck, and neither car was going above 5 miles per hour. The other insurance company was absolutely great in facilitating repair as painlessly as possible, bless them. The point is, within the next two weeks, we received seven letters from local attorneys--most on very heavy, fancy stationery, saying mostly the same thing: 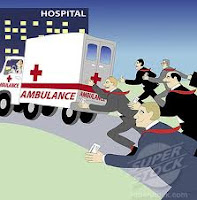 We understand that you have been involved in an accident. Your decisions over the next few days may be critical to your recovery. Since 1982 we have helped answer thousands of questions for thousands of clients just like you... We can help by offering a free consultation where we can explain the law and how it affects your case. We can also help you find the right doctor, help you with insurance questions, help answer questions concerning your car... We won't promise we'll take your case, but we certainly can answer questions and help ut you at ease. And it's FREE (caps theirs) advice. There's no down payment. We only get paid if you do... CALL NOW! A NEW LAW MAY AFFECT YOUR CASE! (again, caps theirs.)

There is a term for this type of solicitation... Ambulance chasing, I think they call it.  Well, it's a living, I suppose. 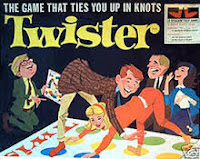 Like that, just a few years back, this obit: With all the sadness and trauma going on in the world at the moment, it is worth reflecting on the death of Larry LaPrise, the man who wrote "The Hokey Pokey." He died peacefully at age 93. The most traumatic part for his family was getting him into the coffin. They put his left leg in. And then the trouble started.