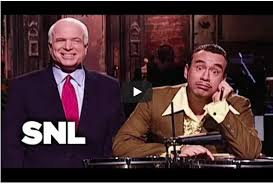 It's not often we see a politician turn comedian and be really good. This is not one of those times... but it it a view into the SNL life of a great man with a healthy sense of humor.

This clip has a few of his skits when he hosted Saturday Night Live in 2002. He wasn't the best host ever, but what he was, is plenty good enough. He not only hosted  SNL but he had numerous other cameos that were seriously funny. See the clip below for when he sings Streisand and other bits of gold.

There has been an outpouring of love and affection for McCain because he has truly earned the honor and respect of most people... unless you are somewhat in the dark or President of the United States.

A current documentary of his life includes rare footage of the 5 1/2 years he spent in "Hanoi Hilton," perhaps the harshest and most dreaded prisoner of war compound known during the Vietnam War. How anyone could have sustained through what McCain and all the other brave men to suffer such a plight is unimaginable for most of us. I actually met and heard a speech given by the next P.O.W. to arrive after McClain and he spoke of those times and the will and spirit to sustain with honor. Two full years of solitary confinement and torture... and then 3 1/2 more. Really!

Then, as a public servant of highest regard for the rest of his life. Who could ask for more?

McCain believed in cooperation and compromise with others for the better good of all. Sadly, there are few like him remaining.

"Ameria didn't invent human rights. Those rights are common to all people: nations, cultures, and religions cannot choose to simply opt out of them. John McCain

And talk about McCain singing Streisand and more, you really should watch this.

We will miss you, John McCain... both Republicans and Democrats, Independents and almost everyone else, save one, we shall miss you.

LAST BIT OF HIS WISDOM: "If you want to persevere--and I am very serious now--if you want to preserve democracy as we know it, you have to have a free and many times adversarial press. And without it, I am afraid we would lose so much of our individual liberties over time. That's how dictators get started." John McCain